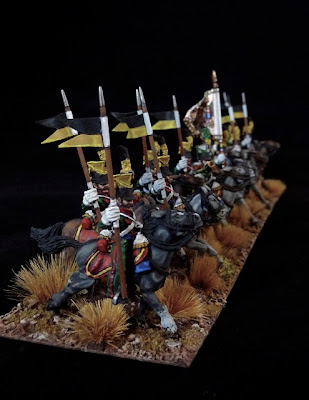 (Originally posted on the Home Page on Sept. 2nd, 2012)
As I mentioned in an earlier post these fellas have been kicking their heels on my paint desk for quite awhile, so I decided to take a break from my other stuff in order to get them done and in the cabinet.

The imperial Austrian army was composed of men from a bewildering range of ethnic backgrounds. In addition to those that were Germanic the empire drew heavily upon men who were Hungarian, Romanian, Italian, Swiss, Croatian, Serbian, Ukrainian, Slovak, Bohemian, Czech, and Polish (phew, that's a passel of folks). 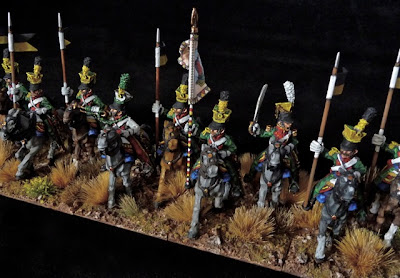 For generations the horsemen of Poland have proved to be excellent light cavalrymen, exhibiting particular expertise with the lance. The French created several regiments of  Polish Lancers as did the Russians and the Austrians. The Polish lancers, serving within all these imperial states, saw heavy action during the Napoleonic Wars. In fact, it would be interesting to know if any of these men ever had to face each other across the battlefield, fighting under different flags. 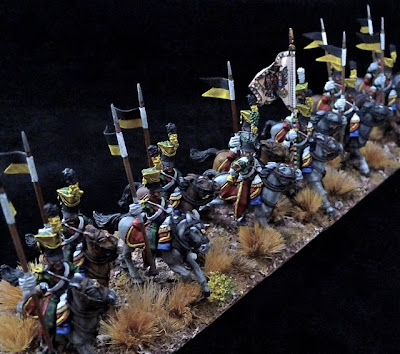 These are 28mm models from Wargames Foundry - quite old castings but I still quite like them. The pennants I made from glue-soaked paper, folded and cut to shape. The regimental colour is from 'Flag Dude'.

I'll probably add another dozen troopers down the road, but since I have quite a few other regiments to complete it will probably be another several years before these guys see any reinforcements - but I'm sure they'll hold their own on the tabletop!